Houston Rapper KenTheMan returns with her third release following her 2021 mixtape “What’s my Name”. Ken earned herself a spot on NO GHOSTWRITER’s list of 10 Female Rappers that would dominate 2022, and her live and studio performances have shown she was deserving of the accolade.

At the surface, the song is about panties, but it’s really about KenTheMan’s effortless and fun lyricism. Throughout the song and the very entertaining music video, she is unapologetic about the fact that she does indeed have no panties on and tells you exactly why her (and your) man loves it.

B-Baby, this some fenty, I don’t do no Vicky secrets

We can’t make no flick, you gon’ get mad and try to leak it, ayy

This pussy like a perky, give him some, he started geekin’

With her first verse, KenTheMan speaks to her lover about her infamous panties. She starts by letting them know that they are from Savage X Fenty. Traditionally, Victoria’s Secret has been the lingerie brand of choice for Rappers but KenTheMan bucks the trend by showing respect to the new Queen of sexy nightwear: Robyn Rihanna Fenty.

Bae, you see I got these panties on

If you nasty, come and eat it with my panties on

Pussy get wetter for a nigga when his money long

Still can get left alone, ain’t tricking on me

Thеn he spending all his money wrong

Sexually dominant lyrics are a common theme in KenThe Man’s raps, but her flow is what makes each song sound unique. Her voice in this chorus is simultaneously strong and seductive, alluring men and rejecting any that don’t meet expectations.

I’m tryna see what you gon’ do bеhind this pussy

I need a ride or die, is you the Bill to my Suki?

Matter fact is you gon’ kill behind that pussy

I gotta put me first, you the Lucious to my Cookie

In her second verse, Ken questions her lover’s dedication, playing on the metaphor of two ride-or-die television couples who have gone to very toxic extremes in devotion to each other.

Bill Compton and Sookie Stackhouse are the main characters in the ‘True Blood’ book and HBO Series. William ‘Bill’ Compton is a Vampire from the Civil War era who meets Sookie Stackhouse, a small-town waitress, and demi-supernatural. The two go through a series of turbulent highs and lows, and the actors are actually married in real life.

Cookie and Lucious Lyon are the main characters in the FOX Series ‘Empire’. They have committed all types of criminal and violent acts to protect each other and their families, moving between passionate enemies and lovers.

Weaving in such iconic pop-cultural references proves that KenTheMan is a smart lyricist who really pushes her pen to make her bars pack a bigger punch. Her flow is also very good in this verse.

Ain’t never met a real thicky out of Texas, he tryna arrest it

Ayy, I been spending money all reckless, got yo’ nigga invested Ayy, do a nigga dirty like messes

KenTheMan is always going to let you know that her men must spend money on her, and in this third verse, she plays on the phonetic “ex”/”exes” sound to express her point. Repeating the sound in different words means she rhymes within the bar and not just at the end of the bar (which she always does). The bars come off clever and witty and show that she is paying attention to what she is saying.

Overall, this song is addictive, and fun and the men NO GHOSTWRITER have played this to say the song makes them want to play it with a girl who has no panties on so we think that means that Ken won this round. 9/10. 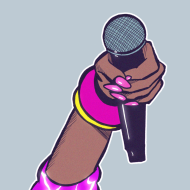